The Possehl Prize for International Art is awarded every three years, and in 2022 the winner is Matt Mullican (*1951). With their decision the jury made up of representatives of internationally renowned art institutions are celebrating the life’s work of this American artist, who continues to have a significant influence on younger generations of artists to this day. As part of the prize Mullican had the opportunity to give us an in-depth look at his creative work over the past fifty years. The show took place at various venues in Lübeck over a period of six months. Curator of the project was Oliver Zybok. 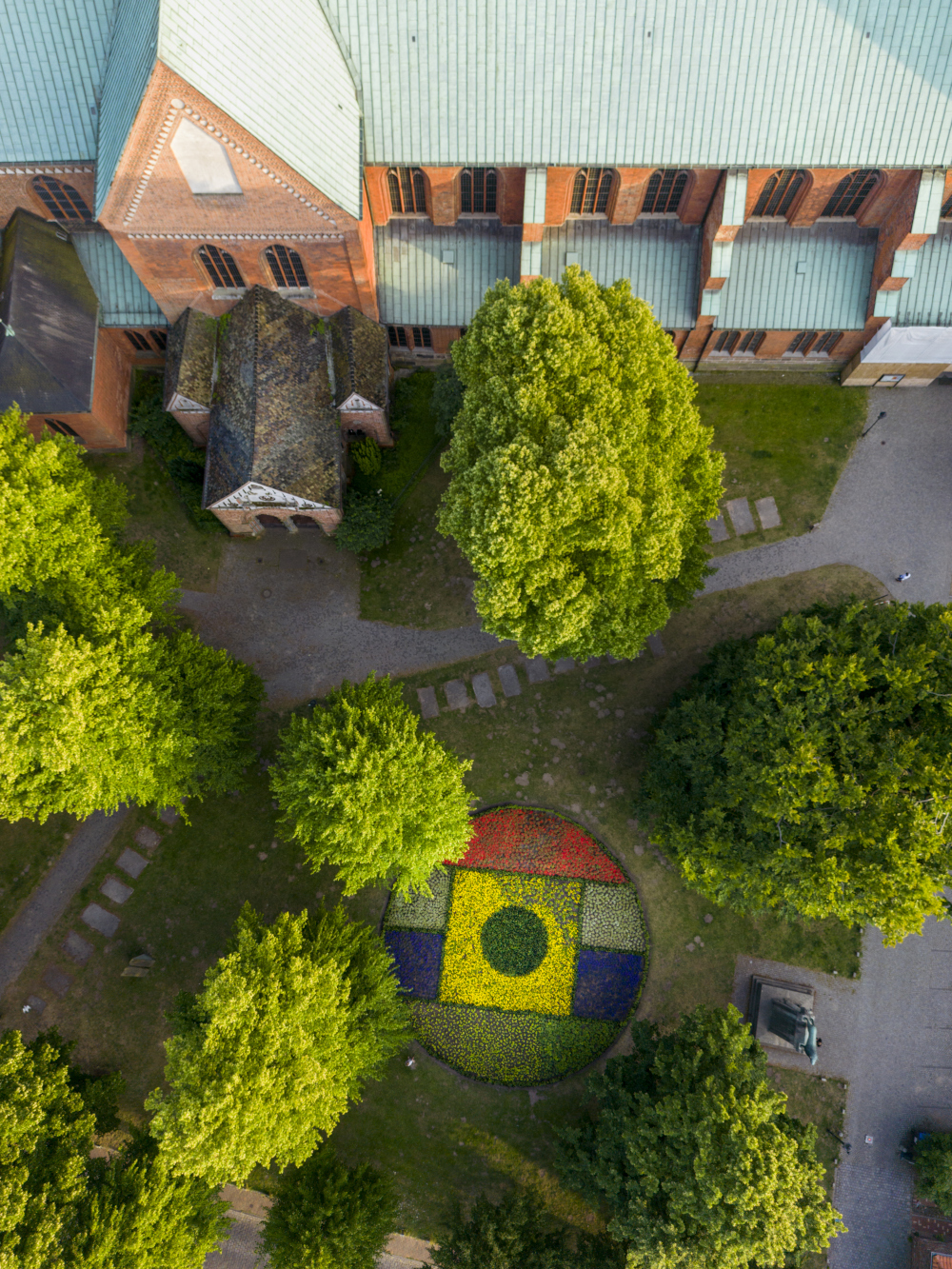 Matt Mullican started his retrospective in Lübeck with FIVE COLOR GARDEN: a circular bedding with flowers of many colours on the lawn outside Lübeck Cathedral. He has used black petunias, red busy Lizzies, white sweet alyssum, blue lobelias and yellow burr marigolds. Having completed one floral installation in Antwerp, this was the first time that the artist has used bedding plants to map out his universe of colours and shapes in Germany.

Its proximity to the religious building ties in with the artist’s interest in questions of spirituality, which is evident in various aspects of his work. The installation features the simple forms and colours that are typical of his semantics and each have their own significance in his “cosmology”: green for material, blue for our everyday world, black and white for language, red for the subjective and yellow for the arts and consciousness. If the choice of colour plays an important role for Mullican, so do simple geometric shapes like circles, triangles and squares, because their clarity makes them easy both to use and be perceived as symbols, and in their general interpretation they are already invested with meaning. A circle, for example, is the epitome of a symbol for life. This clear structure was exemplified on the Cathedral Lawn in the reduced range of colours and shapes and runs through all the exhibition venues in Lübeck like a thread. 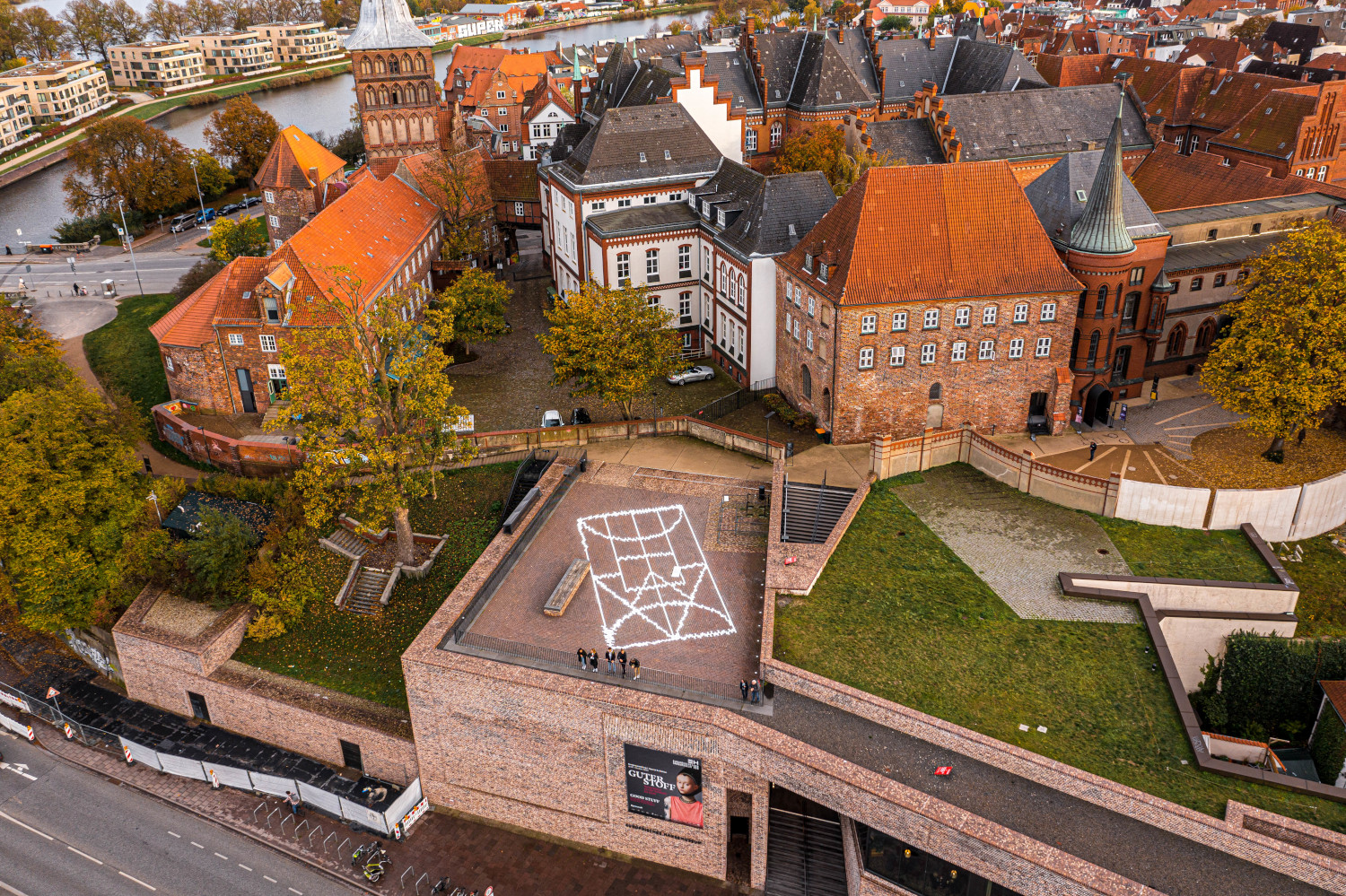 A chalk work entitled FIVE WORLD CHART ON BRICK has been created on the roof terrace of the European Hansemuseum. Here Matt Mullican has construed a town map from his five-world cosmology. Reworking a motif from the 1980s the artist presents a highly simplified form of an urban development, which he has transferred to the horizontal surface of the new museum building by applying chalk to selected bricks. He sees the urban space itself as a sculptural work too, as a way of “practising how to catalogue the world, [...] as a theatre of memory.” For him the vital aspect is how the human body determines the structures of a city, appropriates them or else is locked in, tormented or even buried by them.

The CHURCH exhibition in the university and cultural church of St. Peter in Lübeck showed a monumental work consisting of 211 large canvases, arranged in panels of six pictures each, which co-opt and emphasise the particular geometry and height of the church interior. Black marks on a white background, made using Mullican’s characteristic frottage technique, were the leitmotif of this linguistic and semantic journey through many of the artist’s subjects. This piece also addresses the relationship between space, image and experience; a key topic in Mullican’s work. 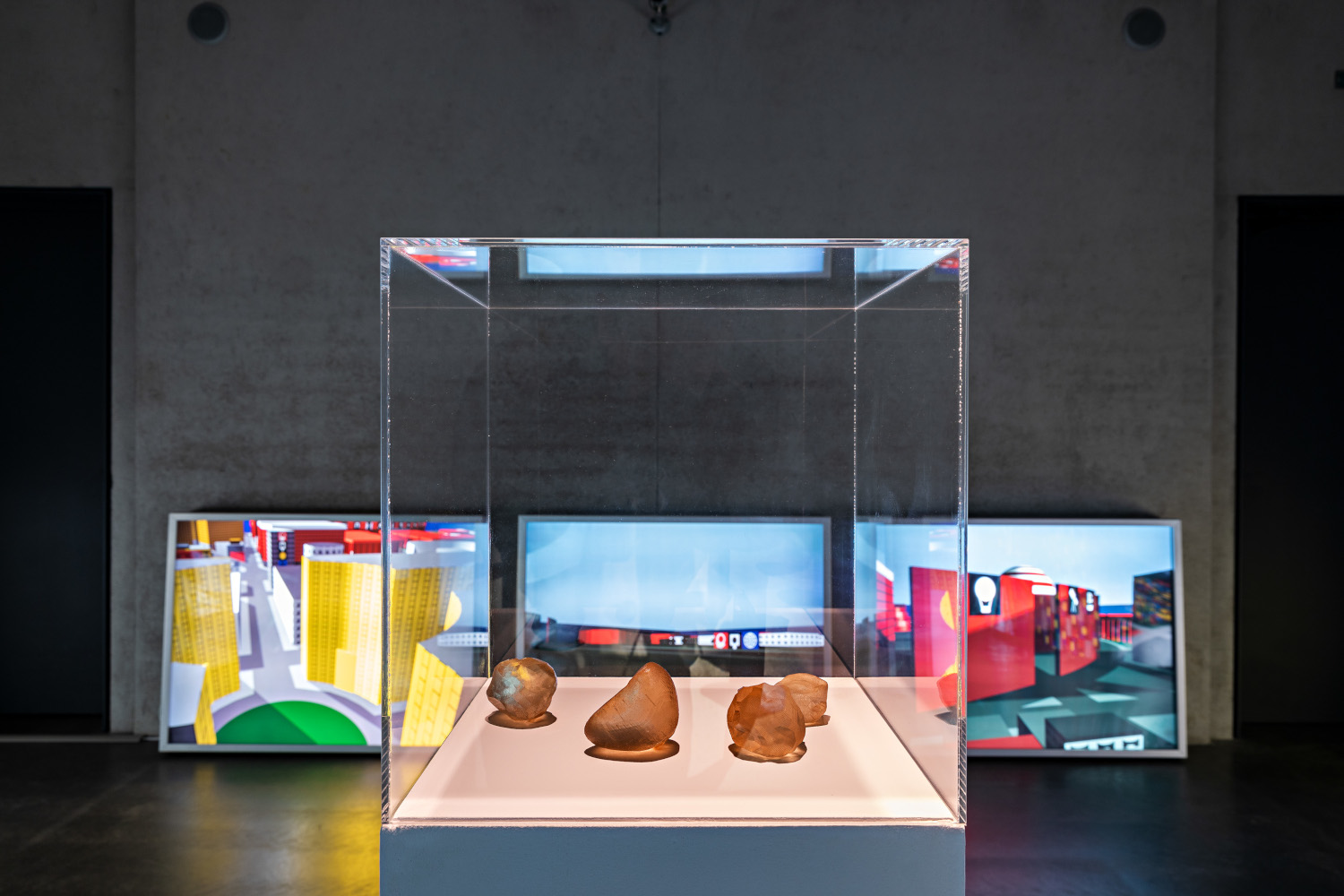 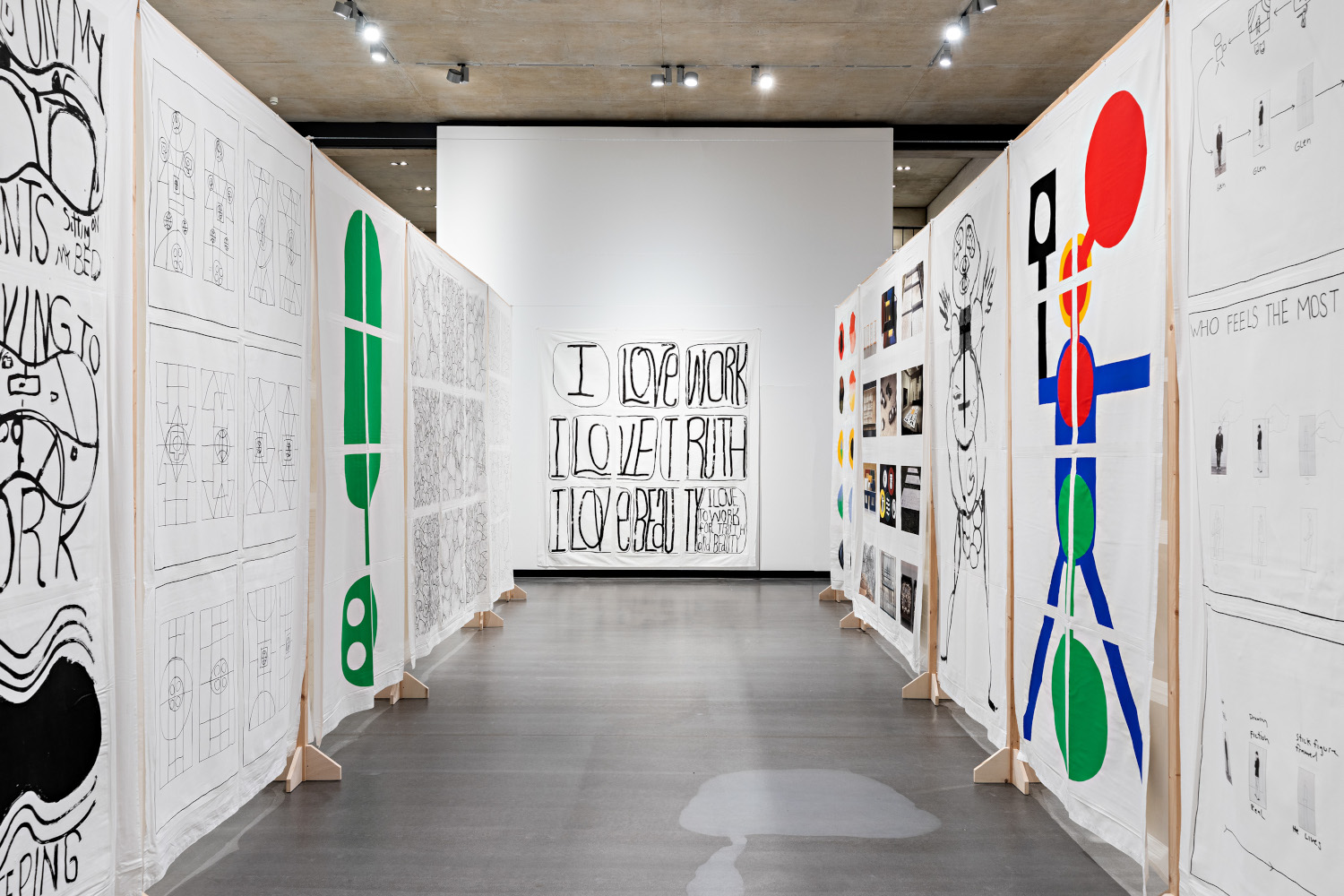 The exhibition 50 YEARS OF WORK in the gallery Kunsthalle St. Annen presented in an impressively condensed form with many examples the diverse range of media used by Matt Mullican. In addition to paintings and rubbings, some of them also in vast dimensions, the exhibits included steel sculptures, photographs, glass objects, performances, videos and computer animations, assembled as installations and arrangements that interact with their respective surroundings.  At the centre of the exhibition was the voluminous piece “Representing the work” (2019), which in its symbolic, formal and chromatic combinations has been designed to provide a complete overview of Matt Mullican’s artistic endeavours. 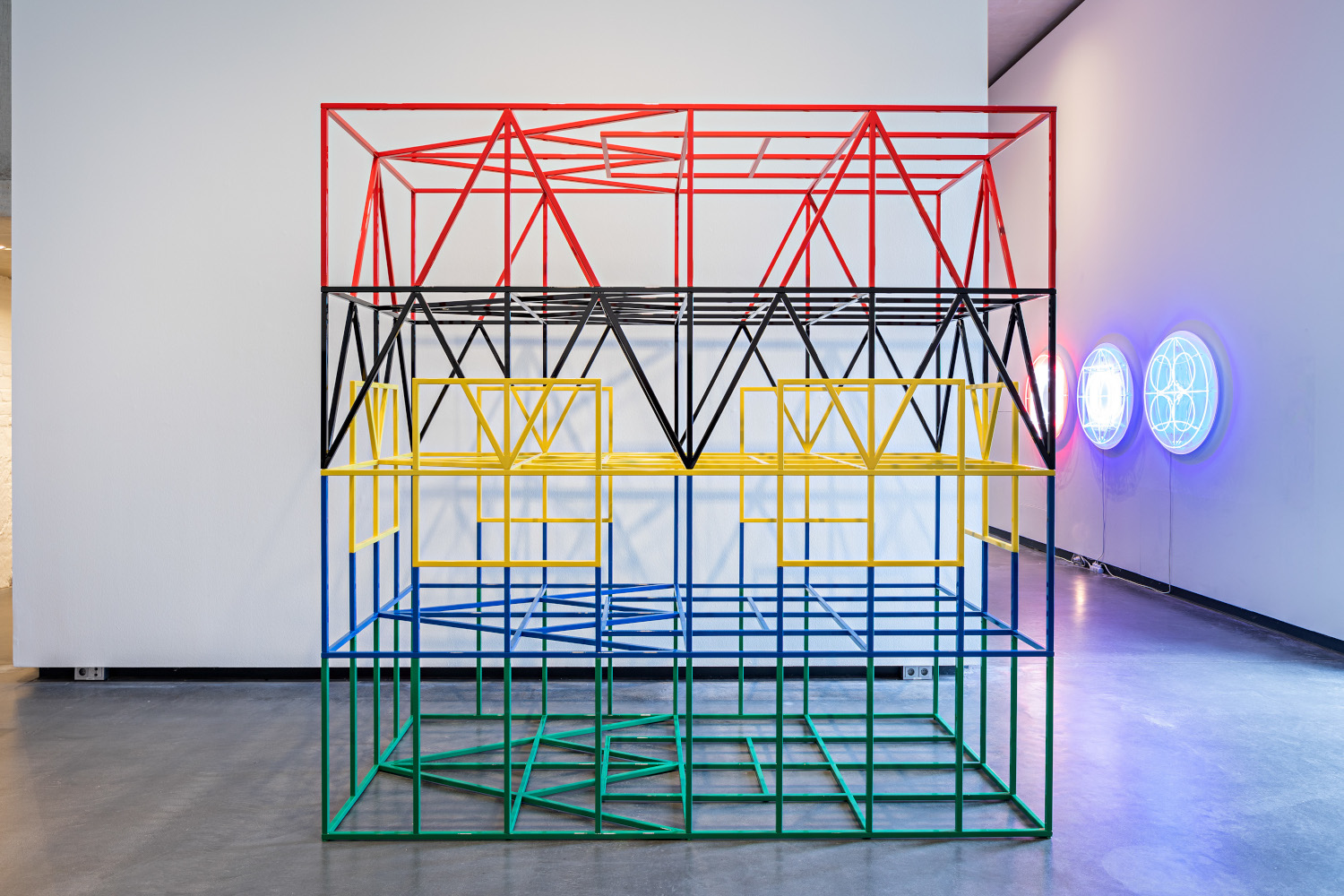 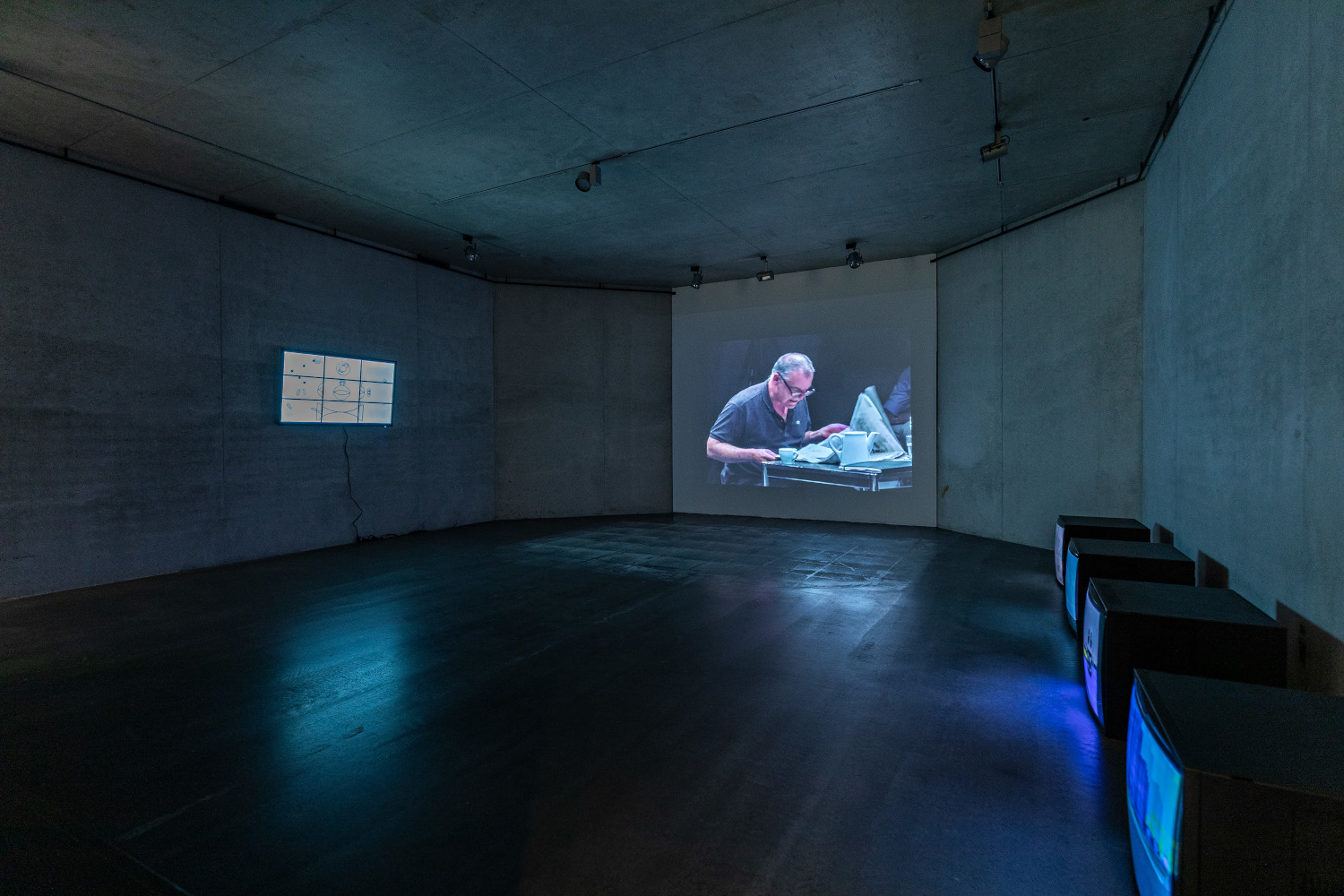 Matt Mullican has been intensely involved with performances under hypnosis since the late 1970s. His interest in trance states was sparked by his work with the stick figure Glen, who represents something of an alter ego for the artist. Using line drawings as models, Mullican began to demonstrate the existence of the figure he had created: by documenting Glen’s fictitious life in drawings, the figure increasingly took on a life of his own. With this extensive series of drawings he tried to pin down the relationship between artistic work and the processes of projection. In the 1980s, by contrast, Mullican’s main interest was in developing his complex system of signs. But he returned to the hypnosis project in 1996 with a series of 15 performances in Brussels, which he recorded on video. Since then Mullican has entered a trance state to represent that other person, who he thinks about as a figure in his work. Mullican’s aim is to convey via this person an experience of life as a structure that emerges from our memories and fantasies. His concern is not a subjective psychoanalytical process, but rather the typical situations in which we act – within the context of significant symbols.

The artist Matt Mullican speaks about his work.

The catalogue of Matt Mullicans show in Lübeck is available at Kunsthalle St. Annen. It can also be ordered - in case you are interested, please send an email with your name, address and email address to stiftung.emil(at)possehl.de.

The meaning of life and the order of the world

The prizewinner Matt Mullican (on the picture with a FIVE COLOR GARDEN made of marzipan) is a leading representative of what is known as the Pictures Generation, a group of artists who began to explore the impact of mass media images on everyday perception from the late 1960s and so declared them to be an established element of artistic endeavour. The artist addresses existential questions that seem perfectly simple, but are in fact highly complex. Where do I come from? Where am I going to? He asks questions about the meaning of life and the order of the world, and has for decades been working on a artistic classification system for his worldview, which he attempts to capture through installations in a wide range of media, some of which take up considerable space. His work extends over many different fields, ranging from painting and various reprographic techniques through to sculptures and performances; his exhibitions always interact with the specific features of the surrounding space.

Mullican was Professor for Time-based Media at the University of Fine Arts of Hamburg until 2019 and currently lives and works in Berlin and New York. His artistic development has taken him in groundbreaking directions that further break down the boundaries between art and other disciplines. Above all, he tries to take the distinction between high and low art to the absurd, because in his opinion it restricts creativity.

In the course of planning the show Matt Mullican has visited the Hanseatic city of Lübeck a few times and was delighted by the opportunities that the prize would afford him.

1. Mullican with Bernd Schwarze; 2. with Antje-Britt Mählmann; 3. with curator Oliver Zybok; 4. in front of the Holsten Gate

Press photos and more information are available at www.artefakt-berlin.de

More about the Foundation

Here you can find our annual reports, Emil Possehl’s will, our art catalogues and publications to mark the 100th jubilee of the foundation.

Our articles of association

The Foundation only supports non-profit and charitable causes and “promotes all that is good and beautiful in Lübeck”.

Back to the top